0 to Z of Playstation 1 Games - Aces of the Air 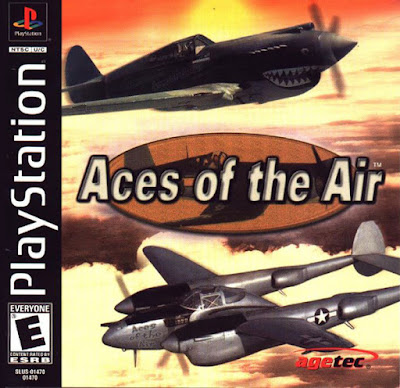 Aces of the Air is a flight simupslation/combat game released on the Playstation 1 on the 11th November 2002 exclusively in Japan and North America the game was developed and published by Agetec, the game allows the player to take a variety of vintage planes, with dog fighting and ground combat.

The games missions involve destroying enemies aircraft and ground bases, when a mission is completed the player will earn a new plane which will be added to the players hanger, each plane has their own individual stats based on acceleration, top speed, turning circle, durability and weapons equipment, players can also customize the aircrafts livery.

No over arching story just individual missions with set specific task like destroy enemy planes or bomb enemy bases and according to the few reviews of the game I have found there are only around 10 missions in total.

Moving away from the ranking aggregators Videochums.com awarded the game a lowly 3.6/10 with their review concluding with Aces of the Air will turn gamers' faces to despair with its awful controls and brief pointless campaign. However, if the idea of dropping bombs while listening to orchestral music intrigues you, you may get a few kicks out of this retro flight combat sim.

Moving over to the user reviews on GameFAQs with a total of 17 user reviews averaging out at 2.44 out 5 with the majority of users rating the game 3/5 with with a rating of 1.5/5 the next highest rating

Reviews for Aces of the Air were far from positive with the game having a 28% rating on Gamerankings.com with a review high for the game coming from PSX Nation who awarded the game 46/100, while Official Playstation Magazine only awarded the game a 0.5/5 which equates to a 10% score.

This is the part of 0 to Z where is visit five online retailers and see what the availability of the title is, and what price you would be looking at if you wanted to pick this title up, the sites that I will be using for this are Amazon.com,  eStarland.com, retrogames.co.uk and Gamedude.com I know the last one is very location specific but from a podcast I listen to and  I have heard they have a huge stock of older games, I will also be including Ebay.com as well

No surprise Retrogames.co.uk do not stock this North America and Japan only release so we quickly move on to eStarland.com who have three options available for this game the first is the disc only which will set you back $3.58, a complete used copy of the game will set you back $6.50, while a new copy of the game is on sale for $9.95 which converts to £7.66 in the UK, €8.44 in the Euro region and 638.11 Bhutanese Ngultrum.

New copies of the game are plentiful as well with a new copy on Amazon being able to be picked up for around $9 with prices maxing out at around the $25 mark, heading to Ebay.com and like Amazon there is a plentiful supply of copies on sale, no new copies however, with prices ranging from $2.99 up to a maximum of $11.95