Army Men World War Final Front is a 3rd person shooter and is the follow up to the 2000 released Army Men World War Land, Sea, Air , as usual the game was developed and published by The 3DO Company, unlike the previous game it would be a Playstation exclusive release.

The game released in the North American region on the 27th of February 2001 and the following month in Europe, like the first entry in the World War sub series it would be retitled for its European release going by the name Army Men: Lock 'n' Load.

Two new gameplay elements are introduced for the first time in an Army Men game and those are underwater and underground combat these form part of the 15 mission main campaign in the game. In  addition to the single player part of the game a much more extensive multiplayer mode has been added to the game, with 16 multiplayer maps, additional weapons to the gamers arsenal including submarines, motorbikes and assault rafts. 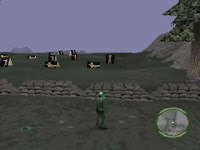 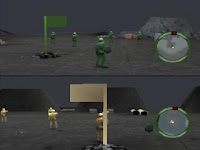 The multiplayer mode also includes a map editor, plus an all new game mode called Grudge Match as well as a mode called steal the bacon also included is the usual co-op mode. Boot Camp also makes a return with a firing range and integrated training where you can practice a series of battle exercises.

The player plays as a grizzled veteran of the previous two Green Tan wars, twice you have stood against the tan aggressors and twice you and your fellow Green soldiers have driven the Tan from the Green lands. Once again you have been called upon to do your duty and stand against the Tan aggressors. 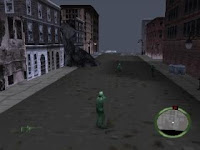 Intel suggests that the Tan are putting all of their nations resources into creating a massive stockpile of powerful weapons the most massive stockpile of weapons ever seen even by Tan standards, the production levels can not be maintained by the Tan for long and all out war is a certainty.

Orders are received, your battalion is to engage the tan in several theatres of war and for the first time underground and underwater you have also been given command of your own vehicles to assist you in your missions against the Tan. 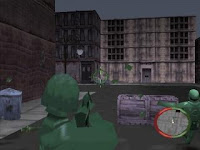 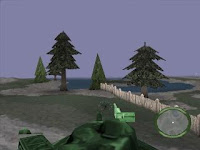 You question is this really the final war against the tan (if only) you know deep down that you have never let down your Green nation, nor are you about to, you also question if the Tan know this is the final battle in a war that has ravaged both nations for three long and painful years.

Another Army Men game and another round of dismal review scores, I think the worst set of review scores for an Army Man game so far, with World War Final Front receiving a humiliating 0/100 for one of its reviews, but as usual we will start with the best.

Which comes from GameSpot who scored the game at an above average 60/100 who compared the game to an annual sports game and the annual face lift they receive with players looking a little different, an extra mode or two but for the most part it is the same game.

They concluded with some mild positives, stating under the layers of poor visuals and rough controls there is an engaging and playable game. Super Play from Sweden were the next highest review for the game with a very average 50 score they concluded their review with. Do not buy this if you are not set to an extremely regular game without real highlights. With green plastic goblets.

IGN scored the game at a below average 45/100 comparing the game to the upcoming Metal Slug X release which features running, shooting and a dash of vehicular combat, unlike World War Final Front however it has not deficiencies of control whatsoever they recommend playing that instead.

The penultimate review comes come All Game Guide who scored Army Men World War Final Front at a poor 30/100 they were critical of the games poor controls, lacklustre graphics and general feeling of malaise and haphazard design. Concluding with there is nothing really to say to justify the Army Men series, the only hope is people stop buying them.

On to the final review and the humiliating 0/100 from Game Revolution, calling the graphics so bad they are almost worth seeing, throw in whack a mole style pop ups, grainy textures and pixels the size of small children. Concluding with the PSX never looked so old.

So lets get down to business with Gamedude who will give you $4 if you are looking to trade in your copy of Army Men World War Final Front, if on the other hand you are looking to buy a copy of the game you will be looking at a $9 outlay for a copy form Gamedude.

Retrogames.co.uk who currently have two copies of the game available, both a complete used copies of the game with discs in excellent condition with an 8/10 disc quality rating, they are priced up at £4 each, please note these are PAL region copies so won’t work on North American or Japanese consoles.

Only a small supply of copies of Army Men World War Final Front available on Amazon.com, a couple of cheap copies in good condition priced between $5.40 and $6.50 but no conformation these are complete copies though. For a guaranteed complete used copy you are looking at a minimum of $15.30 for a Amazon fulfilled copy, which comes with free shipping but you have to spend $25.

Another good quality copy which comes complete with disc, manual, covers and case can be picked up for a few cents over $17 which is the better offer if you don’t have Amazon Prime or are no spending over $25. If you are looking for a like new copy you will have to stump up a significant amount of money, with the two like new copies currently on the market priced at $35.99 and $47.98 once you have added in the shipping costs. For new copies at the time of writing there is just the one copy on the market which will set you back $50.58.