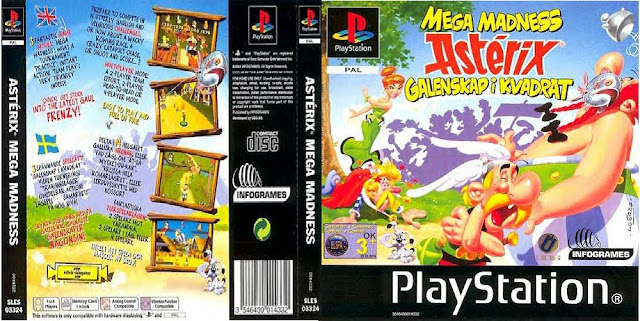 Asterix: Mega Madness is a 3rd person action, sports racing game developed by Swedish studio Unique Developments Studios and published by Infogrames, the game would be the third entry in the Asterix series to appear on the original Playstation and would also be the last.


The game was released exclusively in Europe on the 29th of June 2001 for the Playstation and Windows like previous Asterix games the title would vary country to country with the game called Asterix: Maximum Gaudium in Germany and Asterix: Il Folle Banchetto in Italy. 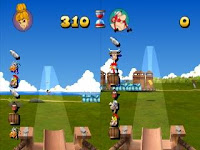 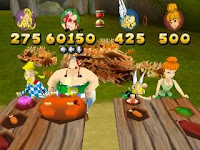 The game is a competition between the four entrants, over the course of a four day period, with the participants competing in various types of mini games. The contests range from shooting various objects including Pirates and unfortunate Roman’s, gathering ingredients for Getafix. 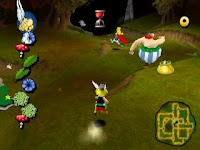 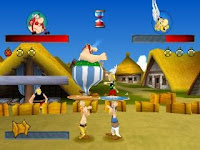 Also eating quickly at a feast table while trying to avoid rotten food, a hunting mini game where the competitors hunt wild boars, as well as two racing modes the first is a catapult race the second is a kind of piggy back race in total there are 14 different activities to compete in. 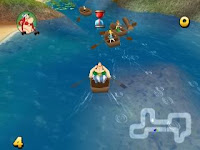 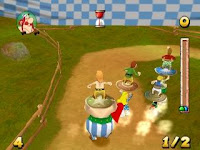 The game modes available range from a practice mode with the player able to play each event individually, the main campaign mode called Mega Madness and the various activities above, with points scored in each event counting towards and overall standing between the four competitors and finally a 2 player mode where each mini game can be played against another human player.

It is 50B.C the little and well known Gaulish village still stands against the might of Julius Caesar and his Roman Empire. Chief Vitalstatistix has announced a contest will be held in the village to find out who is the bravest, boldest and strongest of the Gaul’s. Four Gaul’s step forward to accept the chief the usual pair of Asterix and Obelix as well as Cocofonix and Mrs Geriatrix.

After the critical drubbing of the previous Asterix release the abysmal movie tie in Asterix & Obelix Take On Caesar, we now have a brand new game which has been much better received by critics with the limited reviews available ranging from average to above average.

Starting with the best though which comes from Meristation, the Spanish publications praised the charismatic characters and the visuals of the game they also praised the humour of the game, however overall the game did not haven enough to stand out from the crowd resulting in their respectable 73 score.

French publication Jeuxvideo.com were next up with a slightly lower score of 70, they praised the game for having the feel of the comics as well as the humour and praised the mini games as well done despite some camera problems.

Taking a significant drop in score for the next review which comes from NowGamer, who called the events of Mega Madness to be dull, they even found this to be the case with the 2 player mode, combined with dull graphics, they then went on to compare similar titles with Crash Bash and Bishi Bashi Special coming to the mind of the review with both doing things much better.

The final review comes from Swedish publication Super Play who scored the game at a very average 50 the translation for this review is not the best, the best I can make out they said the game one of the better entries in the series but still not much of a big deal.

So lets get down to business with Gamedude who unsurprisingly don’t stock this European only release same goes for eStarland.com, Amazon.com and Retrogames.co.uk. unlike the previously covered Take on Caesar, Amazon don’t even stock the PC version of the game.

Switching over to the co.uk version of Amazon where we find both the Playstation and PC versions listed however both have a notice saying currently unavailable. So we head over to Ebay.com in search of any copies that are available, however currently none are available as a result Asterix Mega Madness is declared Extinct in the Wild.