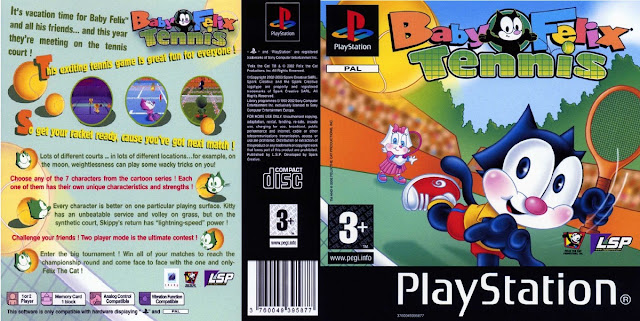 Based on one of the oldest cartoon characters Felix The Cat which dates back to the silent film era of the early 1900s, the game itself is based on a more modern version of the character which appeared in the animated tv series Baby Felix which ran from 2000 to 2001.

The game is a sports game based around Tennis and uses the infant versions of Joe Oriolo's Felix television cartoon from the fifties. The game was developed by Spark Creative, and published by Light & Shadow Production (LSP), and released exclusively in Europe on the 7th of December 2002.

Notable members of the development team Rupert Lewis Jones worked on the Avatar The Last Airbender games both The Burning Earth in 2007 and the 2008 Into The Inferno, he worked as an artist on both games. On the production side of things, Lionel Caillaud worked as an artist on Burnout Legends in 2005, and was lead art director on Rayman Raving Rabbids in 2006.

The game is your standard tennis game format with an angled view of the court so the opponents side of the court looks smaller than your own, with the camera slightly following the player character when they approach the net, controls are pretty basic with the game clearly being aimed at the younger gaming audience. 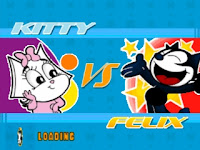 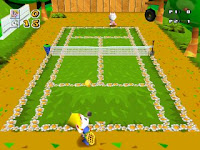 The D-pad or left analogue stick is used to move the players character, for a simple shot the X button is used while a log is keyed to the O button, the player can add spin to their shots and serves by pressing the L1 or R1 button for either a left spin or right spin on the ball. Serving uses a meter system the higher the green bar to the top of the meter the more power on the serve.

Initially there are four playable characters to choose from additional characters can be unlocked in the quick play mode, the game also has a multiplayer mode of 1v1 matches, the final mode is the Tournament mode, this mode is used to unlock additional courts to play, this mode the player faces off against the six other characters and facing off against Felix at the end. 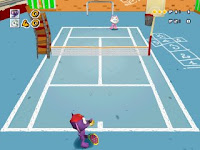 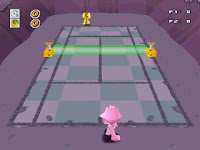 The quick play mode allows the player to set the total number of games in a set, the number of sets and weather or not you want a tie break or advantage when the players are tied at deuce. Once this is done you can you’re the character you want to play as, each of the characters have their own stats for service, power and speed indicated by tennis balls.

The school year has finally ended for Felix and his friends, as usual they have come together and set themselves a new challenge to celebrate the end of the year and the end of the school year, The friends will spend their summer vacation playing sports culminating in a tennis tournament with the unexpected arrival of Felix the Cat promising to make this a tournament to remember.

This being a late release in the Playstation 1 life cycle mean there are little no reviews for the game, I have been able to find one critic review for the game which comes from The Pixel Empire who scored the game at a below average 4/10.

The review called the overall tennis game mechanics as okey, the lack of a slice or lob shot limiting the games scope however, the review did praise the spin you can put on your serve and strokes using LI and R1 calling it a nifty trick.

The reviewer also praised the characters movement on court with characters having to come to stop to change direction overall the review called the controls solid and responsive. The review did have several issues with the game though with the pacing of the game being slow and opponents having clear weaknesses that can easily be exploited which soon becomes a chore.

The reviewer found the graphics to be vividly presented however they never appear truly pretty, they also found the same with the games audio it being like the rest of game simple and inoffensive. The review concluded with this game is clearly targeted at a younger audience with its being easy enough to pick up and play, with no crippling gameplay issues and is presented to a decent standard, however the serious lack of long term play and simplistic nature could prove a deal breaker.

With the lack of critic reviews we now head over to GameFAQs for their user ratings for the game, where we find the game currently has an average user rating of 3.50/5 from a total of 6 user ratings. Taking a closer look at those ratings we find a decent spread from a maximum of 5/5 from one user, with one user each rating the game at either a 4.5, 4, 3.5 or a 3/5, the final user caused a significant drop in the games overall average with their 1/5 score.

Next up we have the games difficulty with just 4 users rating this category, with one each rating the game as having either an easy difficulty level or a tough difficulty level, the remaining two users found the game be just right when it comes to its difficulty, averaging out the game comes in at having just the right difficulty.

So lets get down to business with Gamedude who unsurprisingly don’t stock this European exclusive release, the same goes for eStarland.com. So quickly moving over to Retrogames.co.uk we find one copy of the game available, this copy is a complete used copy with a disc in excellent condition, with a disc quality rating of 8/10, this copy can be picked up for £4 which is about $5.37 in the US or €4.51 in Euro zone countries.

Amazon.com up next with this version of the site not stocking or listing the game, so we head over to the co.uk version of Amazon, where we find the game listed three times with a very good quality used copy available for as little as £3.52 this is complete copy as well.

While the number of copies on the market is not huge price wise they are pretty reasonable, with several copies in good or better condition priced between £3.52 and £7 with only a couple of used copies going beyond this price range.

A handful of new copies are also available with prices starting from £17.21, with a couple more around the £21 to £22 mark, one copy does go high than this due to the large shipping fee of £10 pushing it up to £27.56. There is just one other new copy beyond this price, this copy is far too overpriced based on the other new copy prices, it is currently priced up at £73.69 once the shipping has been added in.