0 to Z of Playstation 1 Games - Bob the Builder Can We Fix It?

Bob the Builder Can We Fix It? Is an action driving game with puzzle elements, the game is an educational title and is a children's game based on the long running Bob the Builder cartoon series from the UK. The game was developed by Steel Monkeys and published by THQ.

The game released first on the 1st of December 2000 in North America, the PAL release of the game came two weeks later on the 15th of December 2000. the game is the second video game adaption of Bob the Builder after his 2000 Game Boy Color debut, the franchise would go on to have another five video game adaptions, Can We Fix It? Is the only one of them to appear on the original Playstation.

This game being aimed at toddlers and young children the control scheme is incredibly simple and easy to use, character movement is controlled with either the D-Pad or the left analogue stick. Any actions that you may have to perform in the game are controlled with the X button. 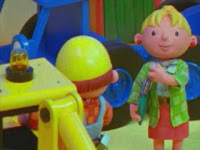 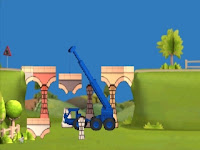 Can We Build it? Is first up with three mini games, the first is Knock it Down, this game involves Lofty, with the player helping Lofty to knock down an old bridge, players control a wrecking ball and swing it at a dilapidated bridge. 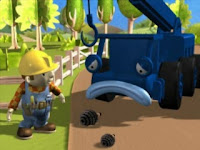 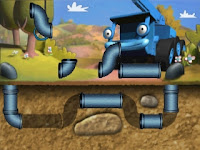 The second mode is Travis Race Day, there are two mini games in this mode, this mode is made up of two races, one featuring Scoop and one featuring Dizzy, this mode involves the player taking control of either Scoop or Dizzy as they race against Travis in this overhead racing mode.

Bubble Trouble mode features two mini games, the first is of the same name Bubble Trouble, this mini game  involves the player helping Roley pop all the bubbles, the player controls Roley as they try to get him to roll over all of the balloons. This mode also features a Where’s Pilchard mini game, this is the same game as previously mentioned but is in a different location. 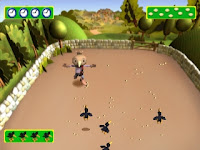 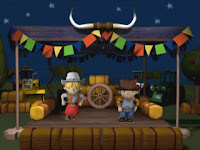 Porcupine Rescue also has a Where’s Pilchard mini game, this like the previous iterations of this mini game has the same mechanics just a new location for where the mini game is set. Tunnel Time is the second mini game, this game has the player helping Porcupines cross the road by having lofty build a tunnel under the road. The player controls Lofty as he lifts a piece of tunnel and then places it in the correct place.

The final mode is called Wendy’s Birthday, this mode has two mini games, the first has the player controlling Bob as you decorate a birthday cake for Wendy. The player decides on the type of chocolate chips, colour of the candles, icing and the decorations. The final mini game is called Wild West Wendy, this mini game involves Bob and Wendy square dancing, with the player able to chose which dance moves to perform.

This game being a late release in the Playstations lifecycle and being a game mainly aimed at young kids, critic reviews for the game are hard to find, with only one critic review available. This single review comes from All Game Guide who rated the game at an above average 60.

The reviewer found that from the games opening and the cut scenes, the animations in them are very much like the television show, which the review found that children will find comfort and familiarity with them, to conclude the review said the following.

As far as engaging and entertaining a preschool audience, the title's attempt to blend familiarity and child-friendly activities into a video game hits the nail right on the head. Bob couldn't have done it any better.

So lets get down to business with Gamedude, where the game is listed as Bob the Builder, if you are looking to trade in your copy of this game you will only get 5 cents from Gamedude for it. If on the other hand you are in the market for a copy you will be looking at an outlay of just $2.

Heading over to Retrogames.co.uk we find that the game is not available or even listed, so we will quickly head over to eStarland.com. Here we find two copies of the game available, the first is a copy with no manual and will cost you $2.75. The second copy on offer is a complete used copy of the game which Is priced up at just $4.13.

Lastly we have Amazon.com where we find a massive supply of the game available, a couple of the first copies available are complete copies of the game and in very good condition, these copies can be picked up for as little as $4.88 and $4.89.

Another very good condition copy is available for $5.96, while there are quite a few of incomplete or disc only copies, but there are equally as many complete copies in good or better condition, with prices for a large number of these not passing the $10 mark, even like new copies can be picked up in this price range.