Boxer’s Road is a sports simulation game based on boxing, the game was an early sports title on the Playstation, the game is a mix of boxing and boxing management style game with the preparations before the actual fighting just as important as landing that perfect uppercut.

The game was developed and published by NEW Corporation, andwas released on the 8th of September 1995, the game released exclusively in Japan. The game also received a re release as a part of the Major Wave series of budget titles, this re release came out on the 9th of August 1996, again this release was exclusive to Japan

After the opening cut scene where you are introduced to your new Boxing mentor the player will be taken to the character designer where you can personalize you boxer however you see fit within the limits of which technology could do in 1995.

The player decided how their character will progress as a boxer with a quite in depth training options available for the player to choose from, weather or not to focus on more strength based training to make your boxer hit hard but at the cost of his movement and speed, or do you opt for a more speed focuses training at the expense of you punching strength. 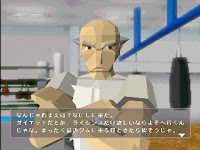 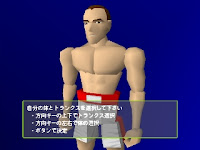 In addition to the training you can spar against other boxers in the gym. Food and diet also play a major part in creating your boxing champion, with the player able to decided on the menu that your fighter will eat, this is a highly important part of the game, as an imbalanced diet could see your slim and slender boxer turn into 250+ pound doughboy, the player controls pretty much every aspect of the boxer even down to adjusting the levels of amino acids. 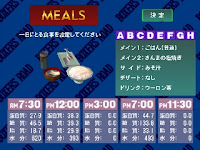 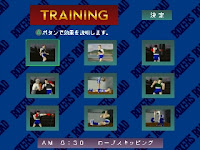 Movement between the various menus is done with the D-Pad, with the Circle button used to select the desired action or menu option, you can also cancel an action by pressing the X button, this button will also skip any dialogue in the game.

While the boxer management side of the game is a major part the game also allows you to take your created boxing machine into the ring as you try to climb up the boxing ladder. When heading into the right the game switches to a 3D polygon fighter, similar to Virtua Fighter at released in 1993. 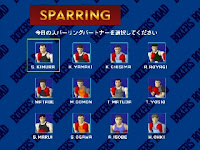 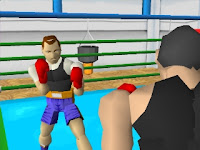 The matches have a variety of views for you to view the action from, including a first person view of the action, in addition there are also views from ringside, from the ground looking upwards, a punch out style behind the boxer view as well.

How well you have trained your fighter will play a big part of weather or not he will be destined for greatness or if he is destined for a first round knockout. If you opted for a more strength based boxer they he will be a powerhouse but will move sluggishly when in the ring, finding the right balance betweens raw strength and speed is the key to taking your fighter to the top. 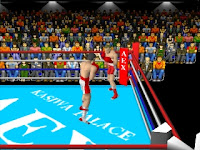 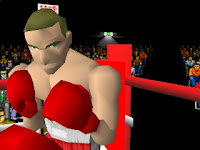 When taking your fighter into the ring the D-pad is used for movement, you have a decent array of punches at your disposal as well. A straight left is done with the Square button while a straight right is done with the Circle button.

The game opens with the player character knocking on the door of their local gym, the player is greeted by a scary looking short old guy who agrees to become your coach, for the long road ahead on their path to becoming the heavyweight champion.

This being a Japanese only release and a game that released very early in the Playstations lifecycle critic reviews for the game are nearly none existent. We do have one exception with the publication Mega Fun importing the game back in October of 1995.

The reviewer was quite impressed with the game awarding it a very good 86, the reviewer commenting saying what a game, they continued by saying that the boxing matches are among the best they have ever seen, with adorable polygonal graphics and boxers that have an impressive repertoire of beats, including some very funny jokes to tease opponents.

While the reviewer did have plenty of praise for the game they did have a couple of issues with it, the first is the lack of a damage indicator, while they also found the movement of the fighters could have done with being a little faster.

Overall though the reviewer found the game to be an absolutely brilliant simulation, which has not been made unnecessarily complicated and lengthy, the reviewer also praised the new elements it brings into play, with the reviewer finding it incredibly motivating to slowly build up their boxer through hard training and proper nutrition, to test his performance in sparring, and then find out in the first pro bouts if my tactics were the right one. Concluding the reviewer said,  Those who have no problems with Japanese texts, should not hesitate and get the game

So lets get down to business with Gamedude, where unsurprisingly this Japanese only release is not listed, So we will quickly move on to Retrogames.co.uk where we do find an imported copy of the game available, this copy comes in excellent condition with a 10/10 disc quality rating and is priced up at £4.

Next up is eStarland.com where we sadly don’t find this game available or even listed, the sequel Boxer’s Road 2 The Real which released on PSP is available, with a used copy priced up at $27.95. With a trade in for a complete copy of the game for $13.

With eStarland a blank on copies of the game we now head over to Amazon.com, however we don’t find the game available here either, the same goes for Amazon.co.uk as well. As a last hope he head to ebay.com in the hopes of finding some copies available.

We do find a modest supply of the game listed on ebay.com, where we find the cheapest copy on offer is a worn copy for $7. For just 50 cents more you can have a good condition and complete used copy of the game, with a very good and complete copy available for $8.98 as well.

A few more copies are on offer, with prices for the majority peaking around the $13 mark, there are a few copies that do go beyond this though, we find two very good condition copies that ship from Germany and are priced at $20.99 and $21.75, both of these copies come with free shipping. The final copy on offer is priced up at $29.49 once shipping costs have been added in.