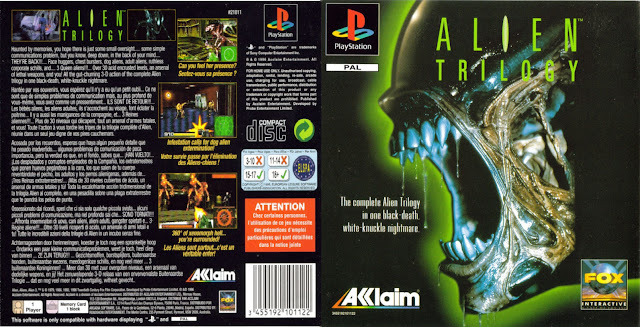 Alien Trilogy is a first person shooter developed by Probe Entertainment, the game was published by Acclaim Entertainment for the Playstation 1, Sega Saturn and MS-DOS. The games was first released in North America in February of 1996, a month later in Europe and on May 31st in Japan, the game is based on the first three movies In the Alien film series.

The game was the first to take advantage of 3D motion capture from Acclaim’s Advanced Technologies Group with the Aliens movements captured using this technology.

Alien trilogy takes many of the elements of the first three Alien films, with the likes of facehuggers, chestbursters, dog aliens, adult aliens, and queen aliens with one of the queens awaiting the player at the end of every section, as well as the alien threat you will face employees of the company who have been either infected by the aliens and are beyond saving or other employees that are actively trying to stop your mission.

The game has a variety of weapons for the player to use from Pistols to shotguns, pulse rifles and a flame thrower as well as others. Health upgrades and other useful items are scattered around the levels, hidden areas are also present and can be uncovered by using explosives like grenades and seismic charges.

The game also has a auto mapping system to prevent the player from getting lost, night vision goggles and shoulder lamps help the player see in the dart these run on battery power, the game also features a motion tracker to tell you where the enemies are.

The game loosely follows the first three films in the Alien series, with the player taking control of Lt Ripley in three sections each based on one of the films. The colony complex on LV426, from Aliens, The Prison Planet from Alien 3 and the derelict spaceship from Alien.

Each of these sections has around 10 missions with the player needing to complete certain tasks in order to progress for example killing a certain number of enemies, finding specific items or activating switches. The game starts in essentially the same was as Aliens with Lt Ripley heading to the colony on LV426 to restore contact. The other marines get wiped out and it is up to Ripley to travel through the infested colony, the prison facility and eventually the downed ship to destroy the Aliens and escape.

Plenty of reviews for this game and plenty of 80+ scores far outnumbering the critics of the game, starting from the top GamePro (US) gave Alien Trilogy the full 100/100, with their review saying two distinct groups of people will love this game, fans of the movies and fans of corridor shooters like PO’ed and Doom. While Doom purists will find something to knock, this game is incredibly fun. A must-have for the discerning Playstation owner, this is the next step for people done with Doom.

Gamezilla gave the game a very impressive 93/100 with a glowing review concluding with, Alien Trilogy is a fun, action-packed, first-person shooter. Definitely one of the better games from this category. If you have never played a first-person shooter, this is a good one to learn on.

The controls are responsive and the game gets progressively more difficult so you can get the feel of the game before dying. This game is also huge. You will not finish this one in a day. I think you'll have hours and hours of enjoyment. Alien Trilogy is a great game and I recommend it to any fan of shooters.

Game Players praised the game as being the best Acclaim title I have ever seen in their 91/100 review, while Electric Playground did criticise the game for not being the most imaginatively constructed game on the market in their 90/100 review, they did say however it is definitely one of the sharpest for the PSX. And with the killer Alien license, you've got yourself a platter that must belong in your library.

GameFan did criticise some of the mechanics but overall they were very positive in their 90/100 review as were EGM in their 89/100 review saying this is one of the must have games, praising the level design and music very highly. NowGamer concluded their 88/100 review with, So, fans of the Alien movies can finally rest easy in their beds – someone has at last created a game that does the films justice.

Heading to the other end of the ratings we find Computer and Video Games, who once again manage to score a game higher than 20/100, with a 50/100 for Alien Trilogy, the review coming well after the games release in 2001. They concluded their review with. Viewed now, the limitations of Alien Trilogy are apparent. 3D games, after all, have moved on a hell of a lot.

It still functions very successfully as a movie to game conversion, mainly because the atmosphere works so well. The player will also get a few shocks from this blaster as they progress, and the visual effects still stand up. However this no longer looks like cutting edge stuff.

A sizeable ratings jump up to the next review with The Video Game Critic scoring the game 67/100, again this is a late review coming in 2000, they praised the terrific looking facehuggers, however they were critical of the graphics that have not aged well and look highly pixilated and flat.

All Game Guide even though only scoring the game a 70/100 were quite positive in their review conclusion writing. In conclusion, if you are a big fan of the Alien films or of scary, first-person shooter games, you owe it to yourself to pick up Alien Trilogy.

It is crammed with enough darkness, mood, atmosphere, and alien monsters to keep you on the edge of your seat throughout. Be warned that it is a pretty challenging game filled with long, complex levels, but people willing to overlook this will relish its world for weeks.

This is the part of 0 to Z where is visit five online retailers and see what the availability of the title is, and what price you would be looking at if you wanted to pick this title up, the sites that I will be using for this are Amazon.com,  eStarland.com, retrogames.co.uk and Gamedude.com I know the last one is very location specific, but from a podcast I listen to I’ve heard they have a huge stock of older games, I will also be including Ebay.com as well

Retrogames.co.uk I think for the first time have a couple of copies for sale, both are PAL versions of the game, the first is a complete copy in good condition and is priced at £7. The second copy which is also priced at £7 is the better quality of the two, with Retrogames rating the quality as excellent.

Moving on to eStarland.com who have one copy of the game available and is priced at $15.50, slightly more expensive than Gamedude however they do offer a better trade in deal, offering $7 for your copy of the game.

Amazon.com prices start around the $12 to $13 mark this however is only for an acceptable quality copy of the game. If you are looking for a copy of higher quality a used good quality copy is currently on the market for $15.12, this also comes with free shipping. This converts to 968.80 Indian Rupee’s, in the Euro zone countries you are looking at a cost of €12.86, while in the UK it will cost you £11.79.

If you are looking for a very good quality used copy from Amazon.com you are looking at a minimum spend of $18.00 or $22.50 once shipping is added in. New copies of the game are quite prices as well, with prices starting at around $50 once you add in the shipping costs.

Over to Ebay.com who like Amazon have a plentiful supply available with a disc only copy available for between $3.81 and $7. if you are wanting a complete copy of the game it won’t cost you much more, with a good quality copy available for around $8 to $10 with several priced at $9.03 and coming with free international shipping.

At the time of writing this there are only one brand new copies on the copy is the long case version of the game, this is the North American version of the game and is priced at $349.99, with shipping you would be looking at a total cost of £323.60 if you were to ship it to the UK. If you are in the US the game will cost you a substantial $373.14.