0 to Z of Playstation 1 Games - Arthur Ready to Race

Arthur Ready to Race is a racing educational game developed by british studio Runecraft and published by the Mattel owned at the time The Learning Company, the game was based on the Arthur tv show and the Arthur Read aardvark character from the Marc Tolon Brown series of books, the game was released on the 1st of November 2000 for the Playstation and exclusively in North America.

Gameplay is very basic with this game based off of a children’s tv show and book series the opening part of the game is a fairly basic soapbox cart level with the player guiding Arthur in his soapbox down a fairly basic course collecting coins and Bionic Bunny cards which can be traded for accessories. 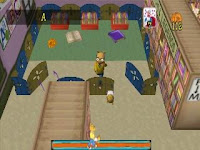 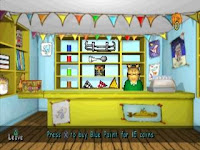 The game features four additional activities these are Baby Kate Library Chase, Muffy's Garden Challenge, Cemetery Search, and Pal's Chase. Cemetery Search for example Binky has lost his backpack in the graveyard and ask Arthur to retrieve it what follows is a fairly basic mini game with Arthur running down a linear path trying to avoid ghosts, bats and muddy puddles. 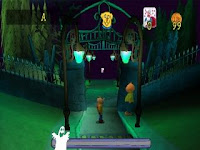 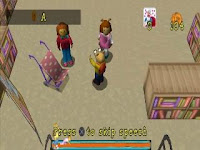 Once you have upgraded your soapbox racer you can take on the final race which is pretty much identical to the first race with Arthur driving his racer down the course collecting coins and Bionic Bunny Cards upon completion Arthur will take his place at the top of the podium and declared champion. 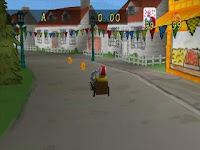 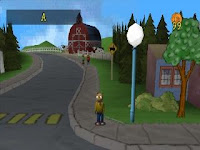 Arthur and his friends are bored, wondering what they can do when a flier blows onto Arthur’s lap for a soapbox cart race, one of Arthur’s friends mentions that there is an old soapbox car in his dad’s barn, the quartet set you to that barn and try out the old soapbox racer.

Arthur and his friends decide the soapbox racer needs work to make it faster and more stable, with this Arthur can performer various tasks around the small game world town for example in the post office the mail man will ask Arthur to find a missing parcel. Arthur can also acquire new parts by solving puzzles at the Sugar Bowl and Pet Shop.

Critic reviews for this game are non existent so we must rely on GameFAQs for their user data, with a total of 8 users rating this game with an average rating of 2.75/5, with a majority rating the game at a solid 3/5 with one user each awarding the game either a 3.5/5 or a 4/5.

One user rated the at a very average 2.5/5 while one additional user each rated the game at below average 2/5 and a poor 1/5, moving on to the games difficulty where 8 users again rated this category with a majority unsurprisingly finding this game simple, a couple of users found the game easy while the remaining user found the game had just the right difficulty, averaging out at a simple/easy game.

The games lifespan up next with again 8 users rating this category with all of them spending very little time with the game, going by the play statistics most of these 8 have completed the game as well with a majority completing the game in less than an hour with one user each spending one or two hours with the game, averaging out the games lifespan comes in at less than an hour.

So lets get down to business with Gamedude who will give you $1 if you are looking to trade in your copy of Arthur Ready to Race, if on the other hand you are looking to buy a copy of the game you will be looking at a $5 outlay for a copy form Gamedude.

Retrogames.co.uk up next who don’t stock this North American only release so moving quickly on to eStarland.com who have one copy of the game currently available, this copy is a complete used copy and can be picked up for $5.57. eStarland.com also offer a trade in and will pay up to $1.50 for a copy of the game.

Lastly on to Amazon.com where we find a limited supply of Arthur Ready to race with just 8 copies on the market at the time of writing with only two of the copies guarantied to be complete copies with one possibly complete.

In which case it would be better to buy the single new copy of the game that is currently available, this copy is priced up at $14.99 with a $4.59 shipping fee, this totals in at $19.58 this comes in at 60 cents less than an acceptable used copy of the game.