Auto Destruct is a Sci-Fi themed action driving game moving away from the arena style games of Destruction Derby and Twisted Metal opting for a scenario based mission structure, the game was developed by Swedish studio Neurostone this was their 3rd and final game developed with the studio previously working on the Elitserien Ice Hockey games for the Genesis. The game was published by Electronic Arts’ the game released first in Europe in December of 1997 and the following month in North America

The game uses 3D sceneries to make up a small chunk of a fictitious Los Angeles the games levels including pedestrian and cross traffic to negotiate while trying to defeat the evil terrorist organization known as Lazarus that is terrorising the city. 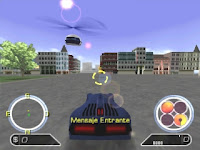 To do this the games protagonists joins forces with an underground agency hired by the US government to take down the terrorists, given a high powered and highly armed sports car to do so. With weapons like machine guns, missiles, plasma cannons, smokescreens and Oil slicks to help you in your quest to drive the terrorists out of Los Angeles.

The game has a total of 25 levels to negotiate with missions varying from Search and destroy, escort missions, defend missions and race to the death missions. The game also moves outside of Los Angeles with missions heading to New York and Tokyo. 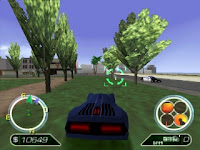 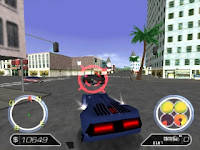 During the game the player will have to maintain awareness of their fuel, ammo and armour resources, fuel can be replenished at the Garage while ammo and can be picked from warehouses around the map, damage to the players vehicle can also be repaired at a repair shop.

In the near future the terrorist group known as the Cult of Lazarus launches devastating attacks on the city as well as destroying the Golden Gate Bridge in San Francisco. One of their other attacks was on a mall in Los Angeles the same mall where your wife and daughter were.

Both of them were killed in the attack, after which you are approached by an underground organization that is working for the government and opposing the Cult of Lazarus using your supreme driving skills to fight back against Lazarus and his fanatics and seek revenge on your families murderers.

Critically while the game did receive a couple of poor review scores on the whole though the game received above average to good review scores from critics, the best of those coming from PSX Extreme who scored the game at a very respectable 86.

The PSX Extreme reviewer praising the decent amount of fun and the challenging later levels to the game, they also called the game a good hybrid like the Strike series and Die Hard Trilogy, with fans of those games recommended to check out Auto Destruct.

Mega Score were next up with an 83 review score they had the following to say in their review blurb,
A car to envy James Bond in hand and a desire for revenge are good reasons to free the world from a sect of suicidal fanatics.

German publication Mega Fun and French publication Player One were both up next with both giving the game an 80 review score. The former comparing the game to several other titles with the tv series Viper, mixed with the third part of the die hard trilogy and twisted metal, with a touch of the G-Police guidance voice thrown in as well.

This Jumble was thrown into a bag and given a good shake and the end result is an entertaining game which could established the race and shoot genre. The review also praised the capable 3D engine, they were however critical of the lack of population and other cars on the streets.

Another German publication up next with Video Games who scored the game at an above average 76, their  reviewer seeing a graphical similarity to the Die Hard Trilogy’s third part, while praising the detail of the city centres, as well as the fast and fluid scrolling.

Pop-up’s however were found to be annoying also the mission structure could have used some work and a bit more variety according to the reviewer, he had the following to say on that. EA's action racer is missing the depth, the constant frenzy would have done a bit of variety.

So you complete one mission after the other, rushing for hours through the same parts of the city, until finally a change of location brings new hope. But also in the other regions, not much new follows, no trace of long-term motivation. The review concluded with, with a bit more innovative game design Auto Destruct could have earned the status of classic but sadly remains a nice shooting game without and real big highlights

Moving to the other end of the review scale we find the lowest score for Auto Destruct which comes from GameSpot who scored the game at a below average 44. the reviewer commenting on the number of missions which stands at an impressive 25, however the review found them to be dull and repetitive. Concluding with, Auto Destruct could've been a modernized city-based version of Midway's Spy Hunter, but it ended up as a G Police that got grounded.

All Game Guide were the next lowest score with an average as you can get 50 score, their review concluding with What Auto Destruct boils down to is a lot of racing and blasting that quickly melds into one big mission with little to get excited about, and even less to come back to.

So lets get down to business with Gamedude who will give you $5 if you are wanting to trade in your copy of the game, if on the other hand you are looking to buy a copy of Auto Destruct from them you will be looking at an outlay of $12.

Heading over the pond to Retrogames.co.uk where we find they don’t have any stock of this title, or even list the game, so we quickly move on to eStarland.com who currently have just 1 copy of the game available. This copy Is an incomplete copy missing the manual and is priced up at $4.98.

Lastly we move on to Amazon.com where we find a small selection of copies available, the first four or five on offer are all incomplete copies but we do quickly find a couple of complete copies with both in very good condition and priced up at $11.06 and $11.62. Another copy this one shipped by Amazon so free shipping only applies to Prime users and those spending over $25, this copy is priced at $12.67.

This is the best you will do for a quality use copy at a decent price from here the remaining copies on offer are only acceptable copies and vastly overpriced copies as well with most around the $25 to $30 mark. A like new copy is on the market as well but this will set you back $44.59 once shipping has been added in.

If you are looking for a new copy of Auto Destruct, at the time of writing this there is just one copy available on Amazon.com, this one copy will hurt your wallet with it currently priced up at $100 with a $4.59 shipping fee so $104.59 in total.