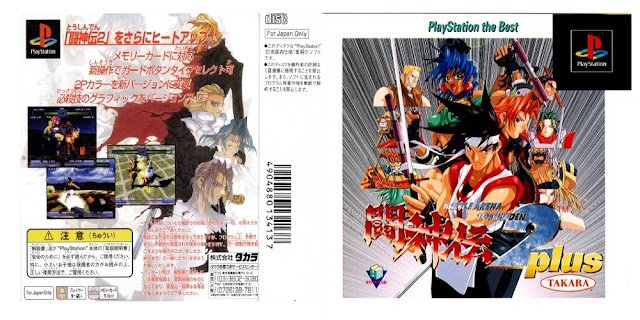 This being a part of the Japanese exclusive The Best Range, this re-release was exclusive to the Japanese market. Releasing on the 9th of August 1996, like the original release of the game it would be developed by Tamsoft, and published by Takara

Notable people who worked on the game, Toshiaki Ōta who worked as executive producer on the game and like Director Shintarō Nakaoka Worked heavily on the Neptunia and Senran Kagura series of games from 2011 onwards. With most recent credits being for Executive Producer on Senran Kagura Peach Beach Splash, Senran Kagura Estival Versus and Cyberdimension Neptunia 4 Goddesses Online in 2017

Shintarō Nakaoka who worked as Director on Battle Arena Toshinden has had a long an productive career that is still going strong in 2017, with Nakaoka working on Senran Kagura Estival Versus as a Technical Producer and Cyberdimension Neptunia: 4 Goddesses Online as Producer. The Neptunia series and the Senran Kagura series have been a regular appearance on his resume since Battle Arena Toshinden 2 released in 1995.

This updated version of Battle Arena Toshinden 2 has no addition story content, new characters or attacks for them, rather this updated version polishes and tweaks, what is already in the game. The features enhanced graphics over the original release, with sharper textures and particle effects replacing the previously used sprite effects.

Some minor tweaks to characters attacks have taken place, for example Fo Fai Mystic Sphere and Duke B. Rambert’s Knight Strike have a slightly new behaviour. The games speed has also been increased, the original release a fair few reviews commented on the slowness of fights, with the game running notably faster now tha the original.

Also included in this updated version of the game is the ability to save unlocked characters, scores as well as control setups, while these were already present in the PC version, the original Playstation release was without them (which seems kind of stupid). 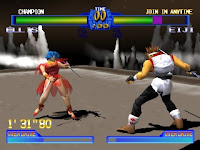 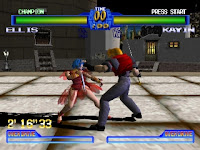 Battle Arena Toshinden 2 Plus has three main game modes to choose from, the first is the verses mode which can be played as either one player against the computer or two human players facing off against each other. This mode is immediately available with all currently unlocked characters available to choose from.

The second mode is the first of two single player modes in the game, the first is the one player mode which throws the player into battle against 8 consecutive opponents, these opponents are controlled by the computer only, no two player action sadly. 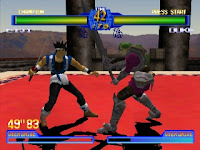 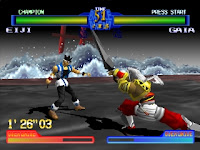 The final mode is the main mode of the game and is the Battle Arena Toshinden  tournament, the player selects one of the available characters, three new additional characters are available in addition to the rest of the roster that appeared in the first game.

Gaia who was the first game antagonist and an unlockable character in the previous game is available, as well as Tracy a notorious New York Police officer, and Chaos who is an executive of the Secret Society who has be tasked with eliminating the traitorous Gaia.

Once chosen your character will then face off against opponents over the course of 10 matches, against other members of the roster, in addition to these 10 fights there are three bosses that the player will have to face, a hidden character has also been added to the games roster. 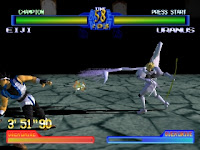 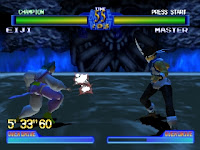 While the actual fighting largely remains the same there have been some changes, one major one is the character Gaia, who has a completely new move set over the first game, in addition all characters get an extra special attack.

While similar to the original the gameplay has been changed slightly making it more of a tactical fight, the cheesing of light attacks and sidesteps without your opponents being able to counter has be rectified, with missed attacks allowing opponents to capitalise on them

The story for Battle Arena Toshinden 2 Plus is unchanged from the original release of the game. The games story is a direct continuation from the first game, Gaia who has been exposed for his treachery in the first game, he has been branded a traitor by Uranus and Master, the two leaders of the secret society. In order to lure out Gaia, Uranus and Master decide to hold another Battle Arena Toshinden tournament so that Gaia can be swiftly dealt with by the forces loyal to the Society.

Gaia in desperation turns to the previous tournament fighters for assistance in overthrowing her former employers and allies. Gaia is however unaware the entire tournament is a trap orchestrated by her former employers for the sole purpose of dealing with her. Ambition however is a powerful motivator with Gaia ambitiously planning to overthrow Uranus and Master and assume control of the Society for herself. A mysterious third party however is watching the events of the tournament very closely

This being a Japanese only release of the game we don’t find any critic reviews available for it, so we head over to GameFAQs for a user review that is available for this game as well as their user ratings for the game. This review comes from the user wanderer35 and is dated the 6th of August 2003.

The review is headed with A fairly acceptable and simple Fighter, the review was reminded of this game which they first played in 1996, it was 2003 and they were playing Soul Calibur II, which reminded them of the game.

The reviewer had high praise for the games main story calling it quite a decent storyline for a fighter, but were critical of the ending to the main story. The review continued by saying that the character designs more than made up for it though.

Gameplay wise the review found it too be too simplistic with not much of a learning curve, with competitors like Soul Edge and Tekken who’s fighters have many moves available to them, Toshinden was a 3D fighter with the move set of a 2D fighter.

Graphically the reviewer praised the character models calling them quite good looking at not really that blocky, overall though the review found the games graphics on the whole were sub par. They went on to comment that this is most notable when your ring out an opponent, the reviewer calling the graphics at this point terrible.

Before concluding their review they commented on the soundtrack, which they called one of the best they had ever heard. Concluding the review found the game to be relatively simple, however this was made up by the excellent soundtrack and unique character design, wanderer35 scored the game a 3.5/5 which coverts to a 70 overall.

Now heading back to the games main page and it’s user ratings, we find the game currently sitting at an average user rating of 3.36/5, taking a closer look at this category we find the vast majority of the 14 users that rated the game rated it at a 3/5 or higher.

Lastly we have the games lifespan, with 8 users rating this category with a wide ranging amounts of time spent with the game. With one user spending just 2 hours with the game, another three users spent around 8 hours playing the game.

So lets get down to business with Gamedude, who unsurprisingly don’t stock or list this Japanese exclusive release, the same goes for Retrogames.co.uk and eStarland.com. So we quickly move on to Amazon.com in the hopes of finding at least one copy of the game.

A few more good and very good condition copies are available for between $13.01 and $16.56 the former again coming with free shipping, between these are a few acceptable quality copies, while these don’t say they are incomplete many usually are, so contacting the seller is advised on these.

Good and very good quality copies continue to steadily rise in price from here on until they reach the only like new copy currently available. This like new copy is priced at $28.88 once you have added in the shipping costs.

A very good quality used copy is priced even beyond this at $36.23 which can be ignored as can the acceptable quality copy that is priced at $72. There are several new copies of this game available as well, with a the price point for these starting at $84.20, another is priced at $84.21 as well both of these come with free shipping

The vast majority of these new copies are priced pretty closely together with a few around the $87 mark and another priced at around $94 once shipping has been factored in. the final new copy on the market does take a small jump in price with an asking price of $108.97.