Welcome to Random on Steam, this will be a look at a random game on the steam store, using a random number generator to choose the page and the game on the selected page. The store page will be sorted by date with the newest being on page 1, while the oldest will be on page 857 the current highest page number as of the 14th of April 2018. This is in no way a review of any kind and only a showcase of the various games that are available on Steam, these could be excellent, good, average, bad or down right abysmal games.

So to the random number generation we have page 356 and of the 25 games listed on this page we have number 6 which is, Steam Rails to Riches, just goes to show how bad Steam is, this game was only released on the 25th of March 2017, since then there has been nearly 9000 games released on Steam as of the 14th of April 2018. 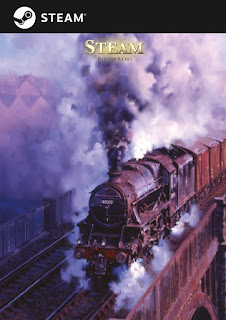 Steam Rails to Riches is the latest adaption of the 2009 released tactical/strategy board game designed by Martin Wallace. This video game adaption was first released for mobile platforms and released on Android, iPad and iPhone in 2015, with the game developed by Acram Sp. z o.o and Mobo Studio and published by Acram Sp. z o.o.

The game would make the jump from mobile platforms on the 25th of March 2017, with the game being ported to Mac, Linux and Windows via the Steam store. Again Acram Sp z.o.o and Mobo Studio would develop the game, with Acram Sp z.o.o publishing the game as well.

Steam Rails and Riches is a strategy board game and is the official video game adaption of the board game Steam. The board game Steam has from 2 up to 6 players being able to play with the aim of the game to build railroads, deliver good along the ever changing network or tracks and stations. 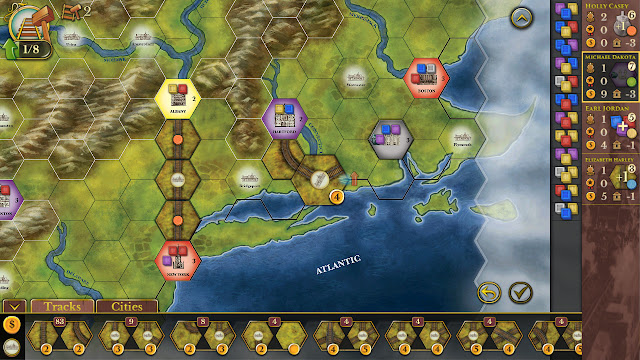 As you progress though the game the players will be able to build tracks, upgrade towns, improve your train as well as grabbing the right good to make the longest and most profitable journey. The key is balancing your finances making your money from your delivers but knowing when to invest your hard earned cash.

The video game adaption of the game allows the player to take control of a railway company, from here you can issues shares, build more railway lines, deliver good along them all while trying to find the most profitable tracks to also pay your investors. 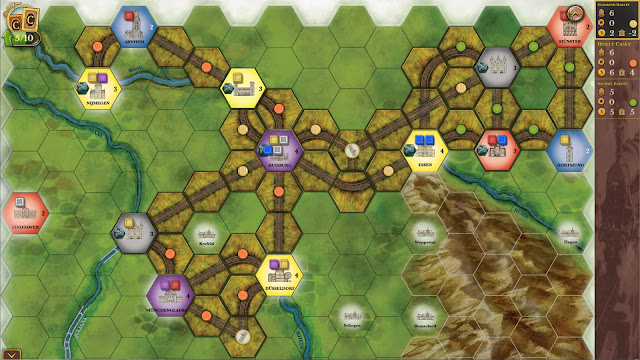 The game features single player gameplay against the AI, it also supports both multiplayer against other human players as well as being able to play with a mix of human and AI players. The games AI has three different difficulty levels, with each of the AI difficulty levels having their own individual strategies.

If you have never played the board game that is based on, then the game offers an interactive tutorial to get you acclimatised to the game. Steam Rails to Riches uses both original artwork from the board game as well as the official rules for the game.

The game board looks identical to the board game with a terrain map overlaid with a hexagonal playing map, laying tracks is done via a choice of 18 different railway line tiles, these range from single tracks to curving tracks rail line junctions and forks. 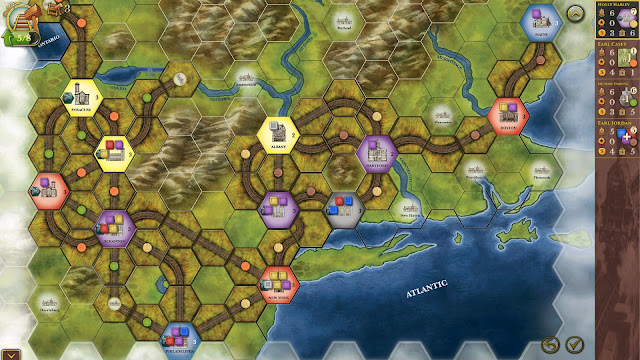 In addition to railway track tiles you have city tiles, these tiles come with 1 red, 1 yellow, 1 purple, 1 blue and 4 gray tiles. Goods cubes use the same colour as the cities, with goods cubes that are yellow only deliverable to the yellow tiled city.

The gray coloured cities do not appear on the map, these come into play via new city tiles, these new city tiles can replace a town already on the board or be placed on a hex containing a town, with each new city opening up new opportunities for railways and supplies extra good cubes.

In Steam players raise funds from the bank to spend on building new tracks and upgrading their locomotives, as well as meeting other costs as well. When raising money from the bank the player gives up income, this represents shares in your company.

The standard game phases for Steam are as follows, first buy capital, second determine the order of play, third select action tiles, fourth build tracks, fifth move goods, sixth collect income and pay expenses and finally the seventh phase is set up the next turn. The full rule set for Steam is extensive I will put a link here to the board game rule set, which I am guessing is pretty much the same in this game as it is the official Steam Rails to Riches game.

A couple of other notes on the game, it has a large language support, these include English, German, Dutch, Portuguese, Polish, French, Spanish, Italian, Korean, Japanese and Chinese Traditional. In addition the game supports a colour-blind mode.

The minimum system requirements for the game for Windows are Windows XP SP2+ for your operating system, a Duel Core 1.6 GHz or better processor, 1GB (XP), 2GB (Vista) and 2GB of memory if you have Windows 7. Graphics wise a DX0 (shader model 3.0) or a DX11 with feature level 9.3 capabilities, the game requires DirectX version 9.0 and 630MB of free available hard drive space. 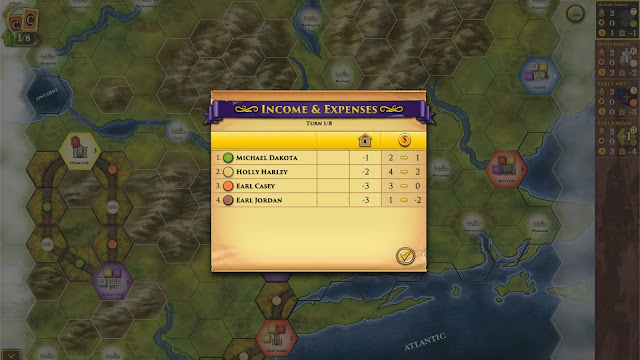 Is using a Mac OS X operating system you will need a minimum operating system of a Mac OS X 10.8 or better to run the game, a Duel Core 1.6 GHz of better processor, 2GB of memory, an OpenGL 3.2 graphics card and at least 670 MB of available  hard drive space.

At the time of the reviewer that game did however have no online play. While that was on the way the reviewer could not reviewer the game based on what is coming, but on the current state of the game.

With the reviewer saying the following on the matter. We can't review promises, however, and the fact is that, in this day and age, board game adaptations without online play just aren't good enough for top marks. The reviewer concluded by saying.

Overall, it’s a lot to enjoy. But you need to know what you're getting into. There are dragons here. Sometimes they are logical ones, sometimes iron. Either way, there’s a lot of satisfaction to be had in slaying them.

In 2018 we have seen a slight increase in the negative perception of the game, even so the positive reviews the game has received in the time since January 1st 2018 have far outnumbered the negative ones with a 9/4 split in favour of the game being reviewed in a positive light.

Taking a look at the most helpful rated reviews on Steam for this game we find a review from termikastrator in which six steam users found useful, this reviewer found the game worth buying, this user having played the original board game found this to be a 1:1 representation of the game. This user did however only spend 0.8h playing the game however

Artedoro who has five users finding his review helpful, with this reviewer also praising this adaption, calling it a perfect adaption of the original board, and it was a pleasure to play. This reviewer spent 4.1h playing the game.

Going to the other end of the reviews we find a negative review that has been rated as helpful by five users, this review comes from Malcolmmackay224 who spend 1.2h with the game. With this users being a big fan of Avalon Hills computer version of 1830, with the user thinking that Steam would be great also.

However the user found the game to be a disappointment for them, with the user finding the games interface to be very poor, with the games rules hard to understand for those who have not played the board game version, with the game tutorial very short and not well presented. Concluding Malcolmmackay224 says the following. There may be a good game in there but I've given up trying to discover it. A real shame because there aren't enough board game conversions for me.

Another negative review that five users found to be helpful comes from AtomicWoodchuck. This user has not played the board game that Steam is based on and the user found the tutorial present here is nowhere near the standard it needs to be in order to introduce newcomers to the game mechanics. With the user getting the feeling that the developers couldn’t be bothered on this score.

The user continued by saying. There are no tooltips and the games interface is very dated, with the user finding it all seems very amateurish, especially considering the price point of the game. Concluding the users said. Thank Gaben for Steam refunds.

With this being a Steam only game there the other sites like Gamedude, eStarland and Amazon are useless, with just the steam price available. At the time of writing if in the UK you can pick up this game from Steam for £6.18 for the base game.

In addition to the base game the game has five pieces of DLC, one of which is free the Southwestern France Map. Additional maps are available to purchase with Carcassonne available for £1.87, USA and Canada for £3.99, Northern England for £3.99 and Belgium and Luxembourg for £2.87.

A bundle is also available for this game, the bundle includes the base game and all five pieces of DLC, this bundle can be purchased for £14.16, this bundle is also currently on offer with a 25% reduction, with a normal price of £18.90, with a saving of £4.74.

If you are accessing the Steam store from the United States the base game will cost you $8.99. as mentioned before the game has five pieces of DLC, one of which is free the Southwestern France Map. Additional maps are available to purchase with Carcassonne available for $1.99, USA and Canada for $4.99, Northern England for $4.99 and Belgium and Luxembourg for $3.99.

Like UK steam users the bundle that is available for this game is currently on offer with 25% currently off the original price of $24.95, this offer brings down the overall price of the bundle to $18.70 a saving of $6.25 overall. 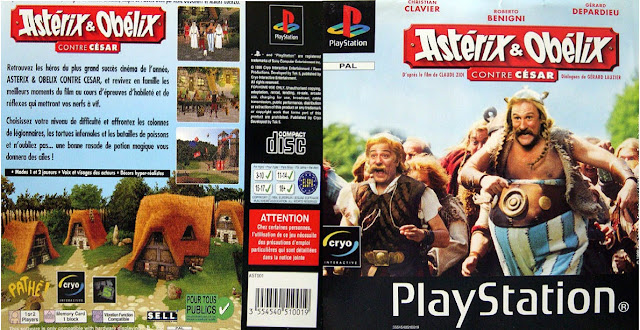 0 to Z of Playstation 1 Games - Asterix