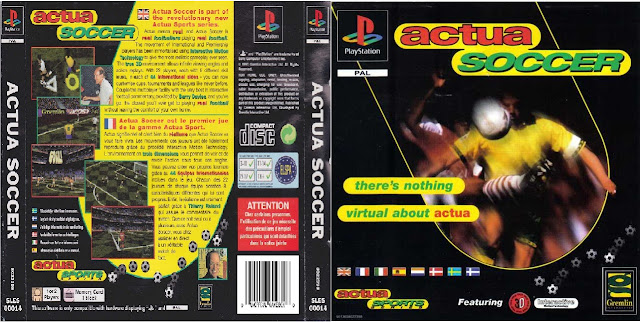 Actua Soccer was one of the first console football game to use a fully 3D game engine, while other football games had rendered a 3rd pitch they commonly used 2d sprites as players, Actua Soccer’s players were Polygonal.

The game was developed with close ties to the football club Sheffield Wednesday with Gremlin Interactive being located in Sheffield as well, with players from the club assisting the developers and providing motion capture for the game.

The game although a club team assists with development only features national teams, the teams would feature 22 players each with a total of 44 nations represented in the game.

Gremlin were aiming for a much more simulation style of football game allowing the player much more freedom during the match, with a much different control scheme allowing players to cross into space with a far more intelligent passing system to other games.

The first edition of Actua Soccer was a best seller in the UK, with the game receiving a massive advertising campaign one of the biggest for a console game, GamePro were largely positive, while criticising the game's lack of flashy special moves and mild sound effects, deemed it the most well-rounded PlayStation soccer game to date, saying it offered a good combination of FIFA's deep strategy and Goal Storm's sharp visuals and accessibility.

Largely most reviews for the game are long gone I have managed to find one from a wordpress.com site called thehande who rated the game 72%  this is a more recent review which was done in 2014 to conclude the reviewer says there is a lot wrong with Actua Soccer’s gameplay and still many great things that later soccer/football games would improve upon. However, for its time it’s actually held up surprisingly well.

This is the part of 0 to Z where is visit five online retailers and see what the availability of the title is, and what price you would be looking at if you wanted to pick this title up, the sites that I will be using for this are Amazon.com,  eStarland.com, retrogames.co.uk and Gamedude.com I know the last one is very location specific, but from a podcast I listen to, I have heard they have a huge stock of older games, I will also be including Ebay.com as well

So lets get down to business with Gamedude, with this being a US site the game goes by VR Soccer 96 which seems to be quite a rare title at the store with them paying $10 for your copy of the game where as if you are looking for a copy it will set you back $19.

At the time of writing this eStarland.com don’t currently stock the game in any release form while Retrogames.co.uk don’t have a copy of the Playstation version of the game they do have two copies of the PC version of the game one used for £4 and one mint condition copy for just £7.

Heading over to Amazon.com where there are a number of copies on sale, not the North American or European versions, it is the Japanese release that is available with a good quality used copy available for $9.22 which comes with free shipping.

Where as a European copy of the game disc only that has been cleaned is available for $3,75 this comes with free international shipping, a copy that ships from Australia is on the market for $7.87 with other copies on the market for cheaper with varying conditions so it is definitely worth shopping around for the best quality to price version.