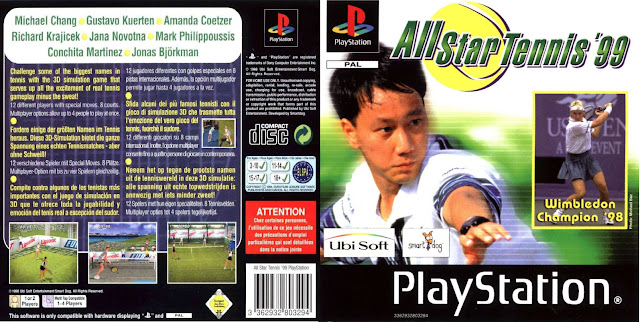 All Star Tennis 99 also known as Yannick Noah All Star Tennis '99 in France, is a tennis simulation based sports game that was released on the Playstation 1 in November of 1998 in Europe, the North American version of the game released in August 1999, while the Japanese release came a few months later in December of 1999.

The game was developed by Smart Dog and published by Ubisoft, as well as the Playstation release the game was also released on the Nintendo 64 and Game Boy Color, with both releases coming in 1999. The game has two covers the French release has Yannick Noah as the cover star, While the North American and European releases have Michael Chang on the cover.

The game offered the familiar simulation modes with singles and doubles matches, a tournament mode and the main meat of the game a World Tour mode. This mode consists of 11 international tournaments with locations such as Wimbledon, Mediterranean, California, Paris, Italy, Saudi Arabia, Japan and Australia.

The player has the choice of the usual shot selection with pass shots, slices, smashes, backspin shots, topspin shots and lobs with players also having access to two unique shots for each player. With the player gaining energy points when winning a point, with a maximum of 3 the player is able to use one of these character shots.

The game also features a bomb tennis mode with a bomb being placed when the ball touches down, if the player is nearby when the bomb explodes the player is knocked off their feet for a few seconds. The game features a selection of real world tennis players Michael Chang obviously, as well as Jonas Björkman, Richard Krajicek, Conchita Martínez, Jana Novotná. The game also features 2 fictional male and female characters to boost the games roster.

No real story or story mode there is the tour mode and I suppose if you took one of the fictional characters through it could be classed as a story mode however there is no dialogue or story progression.

Unlike the N64 version that has a plentiful supply of critic review the Playstation version is light on them with only five to choose from. Lets start as usual with the best of them and that comes from German publication Video Games with their 78/100 score. With the review finding the game fun in the most part however the difficulty spikes were quite high leading to frustration.

Dutch publication Power Unlimited were not far being Video Games score of 78, with their 76/100 review concluding quite positively with, For those who like to play tennis in a somewhat more spectacular way than the well-known sim-style, All Star Tennis '99 is definitely an appropriate game. Speed ​​and special moves provide the necessary variation that sometimes fails this sport.

NowGamer are arseholes is what I got from their review conclusion which reads, A few more options like ‘Avoid the mad knife man’ or ‘Aim balls at Cliff the Christian Crooner’ would have been welcomed. A little more attention to detail should have also been considered but if you are willing to approach All Star Tennis with a light-hearted disposition then you shouldn’t be too disappointed.

The lowest critic score for the game comes in at a 60/100 from Bravo Screenfun, who were critical of the lack of depth the game offers and the lack of real difference in the players abilities.

This is the part of 0 to Z where is visit five online retailers and see what the availability of the title is, and what price you would be looking at if you wanted to pick this title up, the sites that I will be using for this are Amazon.com,  eStarland.com, retrogames.co.uk and Gamedude.com I know the last one is very location specific, but from a podcast I listen to I’ve heard they have a huge stock of older games, I will also be including Ebay.com as well

So lets get down to business with Gamedude, who sadly do not stock this title, likewise Retrogames.co.uk don’t stock the title. eStarland.com is next up they also don’t stock the Playstation version of this game, the only copy they stock is the N64 version, which is out of stock and is usually priced at between $13.72 and $24.95.

So we move on to Amazon.com where the game is available again for the N64 as well as the Game Boy Color however the Playstation version of the game is not available. So we head over to the co.uk version of Amazon, where we finally find some copies of the game.

Ebay.com in a rarity has more copies of the game available than Amazon.com, once again I will be setting my shipping location to the UK, with the cheapest copy which ships from the UK, and also comes with free international shipping is priced at $3.19, from the picture it is easy to see this copy has a large crack across the case.

The next copy another complete copy of the game priced at $5.11, and again coming with free international shipping. This copies case is in excellent condition no visible cracks at all, the next copy available, is only of acceptable quality and again cracks can easily be seen in the case.

A very good condition copy of the game is available from Ebay and is priced at $24.30 or £18.99 in the UK however it is not possible to ascertain the quality of the game as the image used is just a stock cover image for the game, unlike the previous item which had photos of the actual copy for sale.