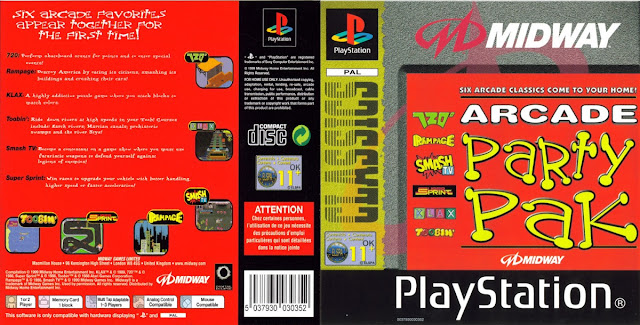 Arcade Party Pak is a small collection of six arcade games from Atari and Midway and Williams Electronics, the collection was developed by Digital Eclipse Software and published by Midway Games from the Playstation 1. This collection was released on the 17th of November 1999 in North America, and two years later on the  23rd of February 2001 in Europe

This collection has a total of six games to choose from starting off with Atari and 720º, where the player is a skateboarder from Skate City, home to one of the largest skateparks in the world, use ramps, rails and swerve your way past pedestrians as you pull off your tricks. Use skate shops around the park to upgrade your gear and skills as well as compete in competitions to earn medals and cash to use in the skate shops. 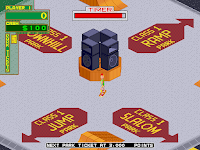 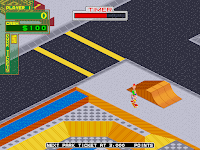 The second game in the collection is Smash T.V the Williams Electronics release from 1990, set in the year 1999 the worlds most popular tv show is Smash T.V an all out bloodfest between two armed combatants in arenas full of mindless beasts and hoards of killer robots, The aim to blast everything in sight and grab the most cash and prizes.

The game was created by Eugene Jarvis the man behind Robotron: 2084 and most recently he was a creative consultant for Housemarque on their 2017 release Nex Machina

For the third game in this six strong collection we head back to Atari and the Domark published Klax an action puzzle game with the aim of the game to collect coloured falling tiles and create rows, columns and diagonals of the same colour.

Fourth game in the collection and the only Midway title in the collection that is Rampage from 1986, the player takes on the role of George, Lizzy and Ralph just three normal American until an experiment went horribly wrong turning the trio into creatures, an oversized gorilla an angry looking wolf and a toothy lizard.

The trio set out on a mission of chaos destroying buildings, the police and military will try to stop the player but they are no match for an angry gorilla fist, players have to be careful though if the trio don’t eat often enough they will turn back into their weak human form.

The final two games in this six game collection both come from Atari, the first is Super Sprint from 1986, a top down racing game. The games tracks start out pretty basic but quickly bring in obstacles to challenge the player from traffic cones to tornados. The player is able to use pickups while traversing the tracks these appear as wrenches and can improve tires, acceleration and better top speed. 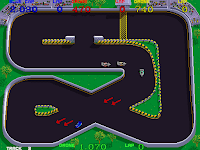 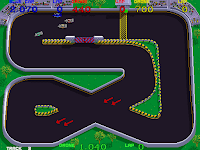 Lastly we have the Sports/action game Toobin from 1988 based on the recreational activity Tubing (also known as inner tubing, "bumper tubing or toobing, where an individual rides on top of an inner tube, either on water, snow, or through the air. The tubes themselves are also known as "donuts" or "biscuits" due to their shape. 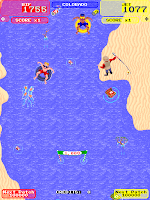 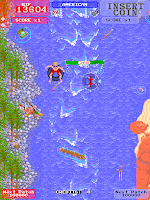 The player rotates the tire left or right and drift depending on the current, the player must ensure they avoid the banks, as well as avoiding other hazards such as crocodiles, logs, branches and fishermen. The player has the use of tin cans to fend off these hazards, while avoiding these there are also gates the player goes through that give them points, each level also has a time limit.

While there is not a heap of reviews there is a decent enough amount, with a varied set of scores as well, starting as usual with the best of them which comes from Digital Press who rated the game a 90/100 who rounded their review off with one sentence. Go get it! Not only is Arcade Party Pak a welcome addition to a party, but it’s also a must-have for your classic gaming collection!

PSM (RIP) scored the game at an 80 they praised the value of the collection with each of these classic arcade games costing around $5 each, which they said is hard to argue with even the two slightly lesser titles Toobin' and Super Sprint are worth a nostalgia trip.

GamePro (US) recommended the game for retro fans and fans of the game that are included however they did conclude only a select audience would appreciate this collection in their 80 rated review. IGN concluded it is not a stunning collection, but is good value in their 75/100 score.

Moving to the other end of the rating spectrum we find Mega Fun, the German publication scoring this collection a lowly 45, concluding this collection is only really for fans of such oldies, recommending others should stay clear.

Fellow German publication Video Games also jumped on the oldies argument in their 58 review they were positive on the inclusion of Klax however were critical of the lesser known titles in the collection. Overall the collection is averaging out at a 68/100.

So lets get down to business with Gamedude who will buy your copy of Arcade Party Pak for $4 if you are looking for a copy of this game from them you will be looking at an expenditure of $9. We now head over the pond to Retrogames.co.uk who have two versions of this title available.

Now moving on to eStarland.com where the game is listed but is currently out of stock, with a usual price of between $3.04 and $6.75 for a used copy of the game, they also off a trade in and will pay $2.50 for your copy of the game.

Lastly on to Amazom.com who don’t have a huge stock of this game available, it is however reasonably priced for a pretty good quality used copy, with prices starting at $7.61 once shipping is added in, this is for a very good complete copy of the game.

If you are looking for a better quality used copy then a like new copy can be picked up for around $11.50 once shipping has been added in, this like new copy also comes with free tracking. If you are however in the market for a new copy of the game, prices will take a significant jump here with a minimum spend for a new copy currently sitting at $38.98 once you have added in shipping costs.