0 to Z of Playstation 1 Games - Baroque

Baroque is a first person post apocalyptic roguelike role playing game, developed and published by the Japanese development studio Sting Inc. The game was released exclusively in Japan on the 28th of October 1999, the game would however release first on the Sega Saturn in May of 1998. The game would also receive a Major Wave Series (Budget) release on March 8th of 2001, again exclusively in Japan.

Baroque would also receive the remake treatment in March and June of 2008 with the game fully remade for the WII and Playstation 2, the game was published by Atlus, with plans for a North American release of the remake in the works, it released on the 8th of April 2008.

At the beginning of the game the player starts outside of the tower with no items or experience points, prior to entering the tower for the first time the player is presented with a weapon called the Angelic Rifle, a weapon capable of killing any monster with one shot, however this weapon has only 5 shots. 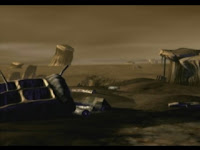 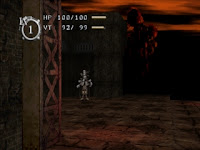 When entering the Tower the player will be able to find additional weapons and times such as swords, these items are scattered randomly around the tower, weapons can also be dropped by defeated enemies, defeated enemies also provide experience points for the player, gaining points will allow the player to level up and become stronger.

Portals are used to progress lower and lower in the tower, eventually death will come to the player, this however does not cause a game over for the player instead this is used to advance the games main plot, with new cutscenes and areas in the game world are unlocked, as well as occasional dialogue from NPC’s, revealing more about the back story and characters, after certain criteria are met the Tower will expand. 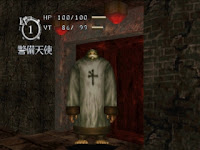 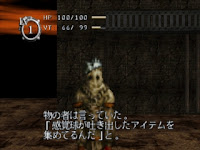 This being a roguelike game there is a risk vs reward element when getting into fights, should the player fall before reaching the end of the current dungeon they are in they won’t die, however they will be transported back outside of the tower, with any equipment they may have collected gone even any equipment you may have had equipped will be lost as well as an experience points you may have gained.

If you find a weapon that you really like and want to keep hold of for later runs through the tower you can thrown them into a consciousness orb, any weapon or item that is thrown into the orb can be retrieved later from one of the NPC’s on your next run. At the beginning of the game the player can store up to 5 items this way, as the player progressed however this number can be increased when certain conditions are met. 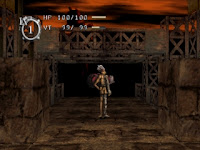 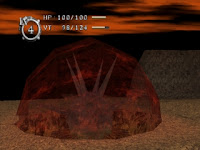 Movement around the tower is done by using the D-pad or left analogue stick with the L1 and R1 buttons used to sidestep, the player can select which action to take by pressing the O button, actions can also be cancelled by using the X button, when not cancelling an action the X button is also used to bring up the map, the character status can be brought up using the triangle button

The game is set in after a world changing cataclysm named the Blaze, the cataclysm took place on the 14th of May 2032. the player takes on the role of a nameless character suffering from amnesia, with the player guiding their character through the Neuro Tower, with the aim to reach the bottom floor of the tower.

Prior to the start of the game the Order of Malkuth discovered the absolute God had returned to the Earth, they also discovered the Consciousness Orbs, these gigantic sensory orbs were used by the Absolute God to compress reality, thee devices were scatted all around the world.

The Malkuth order wanted to learn more about the Absolute God, so they experimented with the Orbs, shortly after small and subtle distortions in reality began to form, and caused people to slowly change. The first to succumb was the leader of the Malkuth orders sister.

Littles are the embodiment of pain and are creatures that can only exist inside of ampules, they were cultivated by Dr Angelicus and Longneck for the use with the Angelic Rifle so that Archangel can purify the Absolute God and take its idea Sephirath and create a new world.

The Koriel are a group of high ranking members of the Malkuth Order who tried to stop Archangel by trying to make direct contact with the Absolute God through fusion to hear its will. A member of the order, the protagonist of the game had a conjoined twin brother, both were near death and it was decided to sacrifice the older brother. Archangel discovered the plan of the Koriel were putting into place and confronted them, interrupting the fusion which in turn caused the Blaze

Critic review for this game are next to impossible to find with the exception of one from Legendra who rated this RPG at a very respectable 80. The review praising the crazy mad atmosphere and very interesting scenario, they also praised the soundtrack for the game which was composed by Masaharu Iwata, who had previously worked on games like Tactics Ogre, Final Fantasy Tactics and the Bloody Roar series.

The review also praised the games constantly present survival effects and the random dungeons. The review did have some criticism for the game, one of the major issues were the graphics which the reviewer said they can be a put off. They found the gameplay was not always accurate and overall they found it difficult to pin down the game.

With the lack of critic reviews we now head over to GameFAQs for their user ratings, where we find the game sitting at a very healthy average rating of 3.88/5 from a total of 12 user rating. Taking a closer look at these ratings we find with the exception of 1 user the game did not rate lower than a 3/5, with a majority of users giving the game a very good 4.5.

Moving on to the game difficulty we find a total of 10 users rating this category, with a large percentage of 70% finding this roguelike game on the tough side. The remaining 3 users are split 2 to 1 in favour of the game being just right, with the final using finding the game to be unforgiving, averaging out the game rates as being tough.

Finally we have the game lifespan where we find just 5 users rating this category, again with a large percentage swing this time in favour of the game having a 40 hours lifespan. The remaining user spent even longer with the game spending around 80 hours with it, averaging out the game clocks in at around a 50 hour lifespan.

So lets get down to business with Gamedude who don’t stock or even list this title, unsurprising really with the original version being a Japanese only release, so moving on to Retrogames.co.uk who sadly don’t stock this game either.

Next up is eStarland.com who also don’t stock the original Playstation version of the game, they do stock the remake with both the WII and PS2 versions available, as well as the Sega Saturn version of the original, this is currently out of stock but has a usual price of between $4.75 and $9.50.

Moving on to Amazon.com we find no copies of the Playstation version of the game, the Saturn version is listed as is the PS2 remake, the same goes for the co.uk version of Amazon. As a last hope we head over to Ebay.com in search of at least one copy of the game.

After sifting through countless copies of the PS2 remake version, I have finally found the original Playstation version of the game. With just 3 copies of the game on the market, the cheapest a used copy in good condition, complete as well, will set you back $22 once shipping has been added in.

This is the first of 2 good condition and complete used copies of the game, the second copy is priced slightly higher coming in at $26. The third and final copy on the market is only in acceptable condition, with deterioration on the spine card and case. This copy is fact the most expensive of the three copies on the market, with it priced up at $43 once shipping costs have been added in.