0 to Z of Playstation 1 Games - Beyond the Beyond

Notable People who worked on this game, Shugo Takahashi who worked as the games Director, prior to and for a couple of years after the release of Beyond the Beyond he worked on the Shining Force series of games. He worked on Hot Shots Golf in 1997 as a course designer before moving to work on Nintendo, where he worked on the Mario Tennis and Mario Golf games.

Kenji Numaya who was one of the Main Programmers on Beyond the Beyond also went on to work on Hot Shots Golf in 1997, he also moved on to the Mario Golf series working as a programmer. He also worked as Technical Support for the 2017 release Mario Sports Superstars.

The games control retains that of the previous generation with the players character only able to move in four directions either up, down, left or right using the D-Pad, the D-Pad is also used to navigate the games menu, which is accessed using the X button. 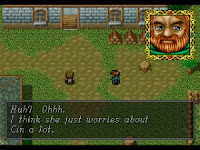 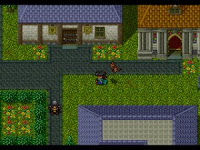 The L2 shoulder button is used to cancel a command while in combat, while the action combat action is taking place this button is used to change the camera angle a couple of buttons have the same functions as others, the circle button also allows you to close most recently opened menu, advance through dialogue screens and message displays, answer no to questions, while the triangle button is also used to search locations.

The game has a status window, this is accessed when pressing the X button and brings up a window showing your characters name, their vitality points, life points and magic points. When flying on Steiner or the Flying Palace you must land in order to access the status window.

The names of your characters you are controlling appear here, as you progress through the game new characters names will also appear here as well. Underneath the character name you will see three stats, the first is Vitality Points (VP). 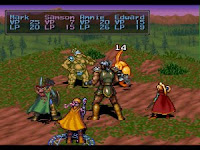 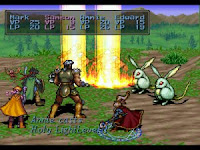 The last stat in this section are your characters Magic Points (MP), these represent the amount of magical power your character has, when this reduces the fewer magical spells you can cast. Next up is the game command window, this offers five options to choose from.

The first is Talk, when facing a character and interacting with them you will begin talking to them, some characters will important information to share with the player character. Search this option allows the player to interact with treasure chests and other objects such as dressers and pots. 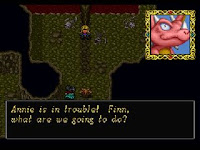 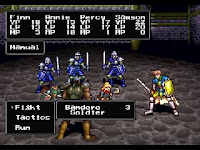 The Item menu allows you to use, equip, unequip or discard an item. When an item has been selected a screen will open with a list of your characters, you will then be able to move to the desired character and pressing x to use the selected item, equip or unequip the item.

Selecting one of your characters on this screen will bring up that characters magic spells, pressing the X button allows you to scroll through the various screens in this second, including Base Attributes, Fighting attributes and equipment

The final option on the prepare menu is Formation, which allows you to arrange your characters battle order, during the game you are allowed a maximum of 5 characters in battle, these are arranged in two rows, the front row has three characters while the back row has two. The front two allows your characters to inflict more damage, but they will receive more damage if hit, while the back row reduces damage received but also reduced the amount of damage they can inflict.

The game opens in a small village in the kingdom of Marion and a young apprentice Knight called Finn who lives with his Grandfather in the village of Isla. The peaceful life of the people of Marion is brought to a sudden halt when the neighbouring empire of Bandore attacks the village of Isla.

It turns out in an age long ago two sides battle for control of the world, the two sides were that of the light and darkness, neither of these two forces were native to this world. During the course of there long fight, many towns and cities were destroyed and shattered the worlds civilisation.

Eventually a truce between the two forces was agreed with the beings of light ruling the overworld, while the forces of the darkness would rule the underworld, with both sides swearing to never set foot or interfere with the others relam.

Critically Beyond the Beyond was not well received with the exception of a couple of above average review scores the remainder struggled to get higher than above average, with plenty falling even below that. As usual though we will start with the best of the review scores which comes from GameFan Magazine.

The review for GameFan scored the game at a respectable 79, the reviewer commented on that game having many strong points, a beautiful overhead map, visually nice battles as well as cool puzzles. The reviewer found even with these good points they were far outweighed by the bad, with poorly composed music and reasonably lame story. The reviewer concluded by saying this being the only RPG on the Playstation it is worth buying, but it wouldn’t cut it in the 16-bit arena.

Electronic Gaming Monthly were the next highest review score, with another respectable score of 75, the reviewer commenting on that Playstation owners have been screaming for an RPG since the system came out, and now they finally have one.

However the review found that Beyond the Beyond doesn’t pump out enough visual spark to come off as a true 32-bit next gen RPG. The reviewer finding with the exception of the 3D battle scenes, cool magic attacks and colourful graphics the game is not much of a step up from 16-bit RPG’s.

Concluding the review found the game be a solid offering for Playstation games that have been without an RPG for so long. With Beyond the Beyond It will do for now but they also commented on future releases like Breath of Fire 3 and Final Fantasy VII meaning it is hard to get too excited.

A big drop in review score for the next one which comes from GameSpot, who scored the game at an average 55. The reviewer finding the game lands in familiar territory, with the game unlikely to convert new players, but it maybe what many are looking for. Concluding the reviewer saying that the game should tide you over until Square’s Final Fantasy VII.

RPGDreamers were next up along with Game Revolution who scored the game at an average as you can get 50. Starting with RPGDreamers, who found the game would not have been all that bad if not for the awful game system, all the way down to the battle system.

The review found the story to be decent as well as the games music, the reviewer continued by saying the game is one of those that you only want to play once for the purpose of the story, and then never want to play it again. Game Revolution reviewer says if you have run out of RPG’s on your Genesis, then Beyond the Beyond would be fine, with it being easy to learn, and is a quite large game as well.

IGN were next up with another drop in review score to a below average 40, The review commenting on that Playstation gamers have been patiently waiting for an RPG to be released. The review continued however by saying, unfortunately they’re going to have to wait a little longer. With Beyond the Beyond simply being below the below the standards of what a good RPG should be like.

Another drop in score to a 30 where we find three reviewers, the first is All Game Guide with the review calling the game such a disappointing game, the reviewer calling the game a serious blow to the genre in general, with the game being a regression over the 16-bit era and brings nothing new to the table.

HonestGamers were next up who called the game sucky, stinky, terrible, bad, disgusting, repulsive, pathetic, unimaginably poor, incredibly stupid, morally wrong. All words which come to mind when struggling to describe the quality of this sad, sad game. The review continued by saying the games characters have no personality to them, a storyline that is flat as a board, graphics that are uninspired pixels, poor game design and sounds that are sleep inducing.

RPGamer were the last of the 30 scoring reviews, the reviewer commenting on the game not being the worst RPG ever made, but continued by saying it comes close. The reviewer finding any fun with the battle system is ruined by the absurdly high encounter rate and poor implementation.

The final review comes again from HonestGamers, with this review coming in 2003, a year after their previous review in which they scored the game at a 30. This revised review has downgraded the game to a dismal 10, calling the game crap and a festering pile of dung. Concluding the review with The cold truth is that Beyond the Beyond would suck regardless of when it was released. Time period is no excuse for this insipid swine of a game.

Heading over to Retrogames.co.uk we unsurprisingly don’t find the game listed with it being a North America and Japanese only release. So we will quickly move on to eStarland.com where we find the game listed, with only one used copy currently available.

Lastly we head over to Amazon.com where we find only a small number of copies available, with only one of the six used copies on offer being a complete copy of the game. Disc only copies will set you back between $18 and $22, a copy with a missing case but other wise in very good condition is priced at just over $80.

The single complete used copy that is available is in like new condition and is the Black Label version of the game, it will set you back $88.98 once shipping costs are added in. The two new copies of the game that are available will set you back significantly more, with prices starting at $153.99 with the second copy priced at $159.99.