Quest Corporation (株式会社クエスト Kabushiki gaisha Kuesuto) also known as just Quest, as well as being formally known as Bothtec. They were a Japanese video game developer based in Tokyo who were active in the video game industry from their founding in July of 1988 up until their acquisition by Square in April of 2002. During their 14 years in the video game development industry, the company were best known for their work on the popular Ogre Battle series of Strategy RPG’s 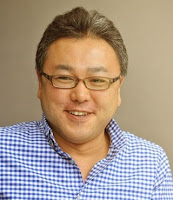 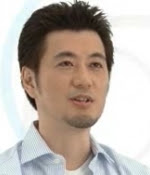 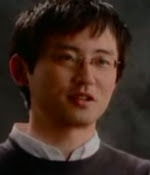 Yasumi Matsuno, Hiroshi Minagawa and Akihiko Yoshida were three of the main members of Quest with all three being key members of the development team for the very first game in the Ogre Battle series, the 1993 released Ogre Battle for the SNES, a game that would also see releases on the PlayStation, SEGA Saturn, Wii and Wii U.

Yasumi Matsuno who worked as the Director on Ogre Battle, in his early life he grew up in a rural area where his only entertainment were movies, television and books, Matsuno also had a passion for creating Dioramas, especially ones based around World War II. He would spend his time in the local library researching, and would incorporated stories elements into his dioramas.

He would be first introduced to video game through playing Space Invaders and Xevious at arcades, while waiting for the train as well as having a fondness for The Legend of Zelda and Dragon Quest on the NES, as well as being a fan of the Amiga and PC.

Later he would attend Hosei University where he studied Foreign Policy, however he dropped the course after 3 years, finding work soon after as a economic reported. He found this work much too unfulfilling however and left in 1989 where he took his first job in the games industry at Quest.

Hiroshi Minagawa who worked as the main Graphic Designer as well as working on the games Image Effects on Ogre Battle as well as being involved in the overall Art Direction of the game. Minagawa was born in 1970 in Japan.

Akihiko Yoshida was born on the 15th of February 1967 in Japan and has had a long career in the video game industry, unlike the previously covered Quest members Yoshida did not start his career at Quest. The first game his is credited with is Zeliard, a Side Scrolling Action RPG from Game Arts, this metroidvania style game that released on the DOS, PC-88, Sharp X1 with Yoshida working as a Graphic designer on the game.

Yoshida worked on one more title for Game Arts the 1990 released NES game titled Faria: A World of Mystery & Danger! A top down RPG that was not well received by critics, the same year Yoshida was credited with his first work for Quest, working on the Monster Design as well as the Graphic Design for Musashi no Bōken a Japanese exclusive NES game.

The following year saw Yoshida work on another couple of Japanese only titles before going to work on the first game of a series that would make the company, that is of course Ogre Battle, the game was also known with a subtitled The March of the Black Queen as well. 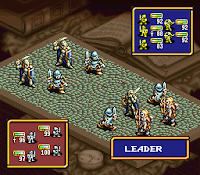 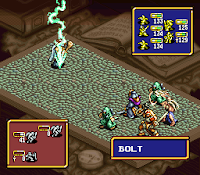 Ogre Battle released in 1993 was the first in the series of Quest's best known series
Yoshida was responsible for the Character and Tarot Card designs for the game. Ogre Battle is the first entry in the Ogre Battle series of Tactical RPG’s, the game has elements from a Real Time Strategy game and a Tactical RPG, the player controls a large army of characters belonging to many different classes with a total of 76 classes.

The player Maneuvers their troops around a tactical map, when the players forces and those of the enemy coming into contact the game switches to a turn based battle system. The player is able to select general commands for their troops, as well as the use power tarot cards and special techniques. As your troops progress through the game they will level up and grow stronger as well as chance classes. 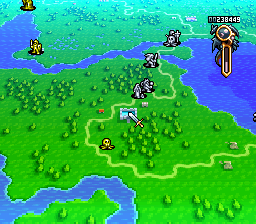 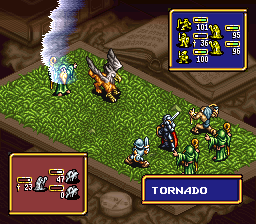 The games story is set 25 years after Empress Endora conquered the entire continent of Zetagenia, the reign of Empress Endora proved to be a tyrannical one, with people from all social classes wanting for a better future.

Eventually a resistance army called the Liberation Army is formed, the players character who they name and background are chosen by the player takes command of this resistance army and leads the people of Zetagenia towards revolution and freedom.

The game also features a reputation mechanic, this is effected by the various decisions you make during the course of the game. With choices you make having the potential of being popular or unpopular with the nation in contact with the Liberation Army.

In addition to the each of the characters has their own alignment from good to evil, for example liberating a town with an evil heavy group of characters may lower the armies overall reputation, these events also effect the overall story with the game featuring a total of 13 endings.

Yasumi Matsuno, Hiroshi Minagawa and Akihiko Yoshida remained with Quest for the 1995 release of the sequel to Ogre Battle in Tactics Ogre. This would be the final game trio would work on before moving to Square in the same year.

The trio would go on to work on the Final Fantasy Tactics series, Vagrant Story as well as Final Fantasy XII with Yasumi Matsuno working on the Story and Concept, Hiroshi Minagawa worked on the Visual Design & Character Textures and Akihiko Yoshida who worked on the Main Character Design and Background. In more recent years Yoshida worked on the two Bravely Default games and NieR Automata.

Following the 1995 release of Tactics Ogre three years passed before Quest released their next game Ogre Battle 64 Person of Lordly Caliber, the game was released exclusively on the Nintendo 64 console, the game is a semi sequel to the first game in the series Ogre Battle and is the third game overall in the series. 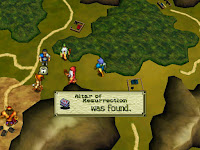 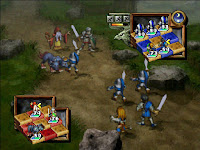 Ogre Battle 64 Person of Lordly Caliber was the third in the Ogre Battle series and released exclusively on Nintendo consoles
The game continued with the same gameplay style as the previous games in the series, with a tactical rpg with strategy elements. The player leads an army of characters into battle with the player controlling if their troops attack or defend or us magic. Player decisions also play a part like previous games, with a branching level system with each having their own difficulty level, combat also enables each of your warriors to gain more experience and level up.

Ogre Battle 64  Person of Lordly Caliber would be the final entry in the Ogre Battle series that would appear on a console, it would also be their last console developed game, with their final three games developed releasing on the Game Boy Color, Neo-Geo Pocket Color and Game Boy Advance.

The first of first of these was a port to the Game Boy Colour of their 1991 release Magical Chase, the game was not ported by Quest but by Micro Cabin to add to the previous releases on the PC Engine, TurboGrafx-16 and Windows.

Magical Chase is a side scrolling shooter in which the player plays as a witch called Ripple who fly’s along the levels on her broomstick. The game features just six levels which can be played on either normal or hard difficulty with only the first three levels that the player can play on easy difficulty.

Magical Chase originally released on the TurboGrafx-16 in 1991 before being re released on Windows and Game Boy Color in 1999 and 2000
As the player progresses through levels and destroys enemies they leave behind different coloured gems, these work as the games currency, the player is able to spend these gems twice per level when a shop appears. The shop allows players to purchase either power ups, extra health and extra lives, the shop only appears once for the third and sixth levels.

In June 2000 the Ogre Battle series received its only release to not release outside of Japan, Legend of Ogre Battle Gaiden Prince of Zenobia, a game that serves as a side story to the original Ogre Battle The March of the Black Queen.

The game releases on the Neo Geo Pocket Color, a rather unsuccessful handheld game console from SNK, this is the reason why Legend of Ogre Battle Gaiden Prince of Zenobia never released outside of Japan, by the time the game was ready the Pocket Color had already been discontinued everywhere except for Japan.

Once the purchase was complete Quest was dissolved into Square and ceased to any longer exist with Square taking over all of Quests development resources and the rights for the Ogre Battle IP. Yasumi Matsuno the creator of the Ogre Battle series left Square in 2005 but did return in 2011 to work with former colleagues and work on the PSP remake of Tactics Ogre